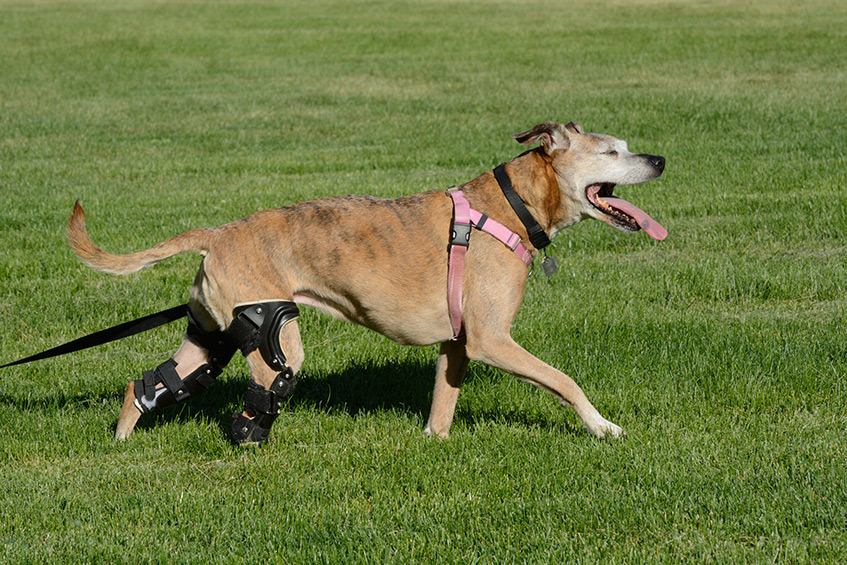 As new graduates with little clinical experience, many of us start off with the view that cruciate ligament ruptures can be conservatively managed, and that surgery is only necessary in some cases. Once we’ve been in the field awhile, the pendulum swings and we tend to adopt the opposite view, believing that CCLR should be surgically corrected wherever possible.

In a recent podcast, Kristin Kirkby Shaw (Ep 73: Care & Arthritis Management), expressed the way most of us feel when newly qualified: ‘I naively, idealistically and somewhat smugly thought: “How dare those surgeons do a TPLO on a dog with a partial CCL tear!”’ In the intervening years, she has come full circle and recommends surgery as the best management option for this condition.

What is a Successful Outcome?

To me, this is really the crux of the matter. When it comes to the treatment CCLRs, what does success look like to you, and what does it look like to the owner, the dog, and the referring veterinarian? Functionality is always our goal, but how this looks may vary according to the perspectives of owner, vet and dog.

I love the way Kristin Kirkby Shaw puts it in a recent CARE post: ‘A CCL rupture is not a life-threatening condition requiring urgent surgical intervention. Plenty of dogs out there tear their CCL and never make it to see a veterinarian, let alone a surgeon. And many dogs that present to a surgeon with a CCL tear are not surgical candidates. However, I do believe that surgery is the best option for achieving optimal function and minimising the progression of arthritis.’

In other words, dogs will survive without surgery, and in most instances will bear weight, run and play again. And that may be all the owner needs from their pet, regardless of whether the dog is bunny hopping, sitting sideways, or labouring to get up from a lying or sitting position.

Owners often do not know any better. As Carrie says in the podcast, ‘They do not know what they do not know.’  An owner won’t see or understand the compensations, the progression of arthritis, or the possible future breakdown that may occur, unless we educate them and help them to make informed decisions, as well as pointing out the compensatory movements in their individual dog in a way that allows them to see, identify and understand what they are seeing.

Of these treatment options, bracing only could be the most cost effective, while rehabilitation only will likely be the most expensive and take the longest time. That leaves surgery somewhere in the middle.

Kristin Kirkby Shaw notes: ‘The cost of surgery will vary between regions, but in our practice (providing surgery and rehab), you would get about 30 rehab sessions for the price of a TPLO. If we are truly trying to do the best rehab possible, we would be seeing the dog two to three times a week for about nine months, or at least 70 times. So, a full rehab programme would wind up being more costly, and take more time, than surgery would.’

Carrie Adrian says: ‘I can spend your time and money – how much time is conservative management? Three months? Four months? For that amount of money, I can put your dog in a knee brace and kick him out the door.’

When it comes to CCLR, stability of the joint is the main concern. In a joint with a constant moment of flexion and therefore torque, stability is not an achievable rehab goal without some help – ideally in the form of surgery, and possibly in the form of a brace. A weightbearing joint angle of 130-140 degrees means that stability needs to come from somewhere; not only from the ligaments, but also from the co-contraction of the agonist and antagonist muscles of the stifle. We know that this muscle activation is impacted when the cruciate is injured, with a delay between agonists and antagonists creating an uneven application of pressure on the joint and furthering instability.

Further biomechanical implications include a change in angulation of the limb, the resultant change in slope of the spine, changes in weight distribution between fore and hindlimbs and changes in gait and movement. These are all changes that we can see, but that have not yet been measured and quantified.

Carrie Adrian: ‘Going back to conservative management, is it appropriate? In my mind, biomechanically, it is not.’

We know that without treatment, the first thing we will see developing is arthritis in the stifle and, over time, probably in other joints, too. We do not yet know from research how the compensation will affect other structures in the body. We cannot tell our owners with certainty that x, y and z structures will break down over time, but clinically we have the experience to know that a changed gait and posture will certainly lead to changes in joints, muscle development and function and, over time, pain and breakdown in areas that are just plain used incorrectly.

Carrie raised an interesting question in her podcast: Is the pattern of compensation individual to each dog, or is there a predictable pattern of strain and injury? Will the problem simply be ‘passed down the line’? Will the dog develop further problems? We just don’t know the answers to these questions yet.

Bracing as Stabilisation for the Stifle

There was a fascinating conversation on the use of bracing in the Vetrehab io group not long ago –  I highly recommend that you read it. See the Vetrehab io

(If you are not yet a member of the group, consider joining! Give me a shoutout and we can help you join).

At this point, there is just not enough data for us to say for sure what effect a stifle brace has in the rehabilitation of this condition. We know that weightbearing is increased in the affected limb, but is cranial drawer eliminated or reduced? How are muscle activation patterns affected? Is there a faster return to function in dogs using stifle braces? How does a stifle brace affect the progression of arthritis in the stifle? How are the dog’s gait and biomechanics affected? How does the stifle scar down over time with the use of a brace?

David Dycus in the Vetrehab group conversation gives a possible clue as to the actions of a brace:

‘When looking at humans, a stifle orthotic has several purposes, one of which is to slow down the movement to allow surrounding periarticular tissues and muscles time to react and control motion. Given what we have seen in the literature, weight bearing improves over time with an orthotic, but the UGA study – which suggested an adaptive pattern – and my personal experience of still seeing tibial thrust when dogs are in an orthotic, lead me to believe that the orthotic may very well be doing what is one function in humans: simply slowing down the motion surrounding the stifle to allow the body more time to control motion, as well as reducing fatigue of the surrounding tissues.

Size of the Dog

Most surgeons are taught that a dog under 10 or 15 kg may not need surgery, while dogs over 15 kg benefit from surgery to stabilise the stifle. There has been some research that supports the notion that small dogs can cope with these injuries better than large dogs, but I still find it an interesting point. As Carrie says, ‘There is still an unstable knee that alters gait. Some individuals seem to get away with it while others don’t.’ Which brings up the question, why do some small dogs seem better able to cope with an unstable stifle? They still display changes in gait and posture, and arthritic changes still occur in the joint, so what makes them different?

To me, this is a question that will come down to the clinical presentation of each individual patient (as most things do).

Full vs Partial Ruptures of the Cranial Cruciate Ligament

Mostly, we accept that a partial tear may be a candidate for conservative management, while a full tear ought not to be considered for conservative treatment. But is our identification and characterisation accurate? Carrie Adrian says, ‘I think back on my research data, and what the surgeons were identifying as a full tear, I had 40-60% of the ligament still intact at necropsy! That makes this a really interesting model.’

It seems that this is another area of this condition in which we really need more information, so that we gain a deeper understanding of what is truly occurring in full and partial ruptures.

The Involvement of the Meniscus

A large portion of patients that suffer from CCLR have a concurrent meniscal injury, with data showing varying percentages for this; 30 -70%, depending on the resource. Meniscal involvement will generally be the culprit if there is a lack of improvement in a CCLR patient, whether conservatively or surgically managed, especially if it remains undiagnosed and untreated. The best way to diagnose meniscal involvement is during an arthroscopy, which is unlikely to be performed in a conservatively managed case.

Accepted treatment for meniscal injuries at this point is surgical intervention. A 2012 study by Horie et al. looked at the use of allogenic stem cells in the healing of rabbit meniscal tears, and showed good results. However, we have no data and no real experience in dogs.

Have you used stem cell therapy as a part of the rehabilitation of conservatively managed CCLRs that have meniscal tears? I would love to hear your feedback.

I hope I have raised a number of issues and questions to consider before advising pet owners on the far-from-straightforward matter of cranial cruciate ligament ruptures. There is still so much we do not know. David Dycus recommends that we base decisions in consultation with owners on the specifics of the case:

‘Rather than set a patient size, particular breed, cost, particular conformation, chronicity, etc to blanket a medical decision, the decision really needs to be patient specific and centred.’

Please feel free to share any comments or cases below, or in the Small Animal Vetrehabbers Facebook group.  We’d love to hear from you!