The Three Strands of Rehabilitation in the Canine Amputee 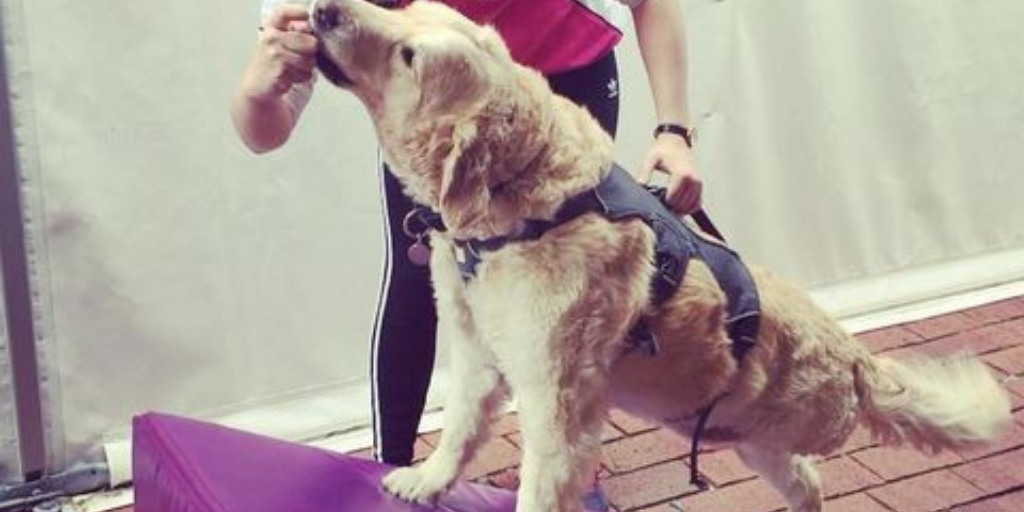 After a series of canine amputee’s made their appearance at Equine-Librium College practical examinations, the different adaptations and movement patterns of these patients, compared to ‘normal‘ patients, was highlighted to the examiners. With her curiosity sparked, Marinette Teeling set out to understand amputees a little bit better, and presented a fantastic webinar on the subject to our Small Animal Members.

As Vetrehabbers, one of the challenges we may face as we treat these patients, is where to start with their rehabilitation.

In her webinar, Marinette Teeling highlights the biomechanical changes that occur within the entire body, particularly the remaining limbs and the spine, and how these changes will compromise the remaining joints and structures in the dog over time.

To try and protect the body as much as we can and improve the function of the individual, we must take three important areas into consideration:

We have all been cautioned not to release too much, too quickly, and this is certainly one of the cases where this caution holds true. As the patient adapts, they will develop compensation patterns to help them remain functional. The incorrect structures will be providing stability and support to the compromised areas of the body.
It is essential that we are very aware of these patterns within the body, and the structures affected, and that we work on releasing these compensations through our manual therapy slowly, as we address postural stability and core strength, together with joint function, over time.

This terminology is often used in the human PT industry, and less often in the veterinary field, but the principles hold true.

The terminology refers to the stabilization of joints, most often individually considered. The form closure of a joint is related to its anatomical structure, the shape of the bones that fit together to form a joint.
If form closure was all that was required to stabilize a joint, the joint would be pretty immobile. Both mobility and stability are required if our patients are to be functional.

Enter Force closure. This is where muscles, tendons and ligaments (and fascia!) play a role in stabilizing the joint through motion – where multiple new forces will be acting on it. Force closure is the mechanism whereby a joint maintains equilibrium in motion.

Force closure can be linked to compensatory patterns, and in this way they go hand in hand. An over-recruited hypaxial muscle that is providing added stability to the lumbar spine will become painful, but it is serving a role in maintaining the function of the patient. Therefore muscle recruitment patterns need to be retrained together with reducing compensatory movement patterns to ensure that postural correction and improved muscular endurance can occur.

We see multiple postural adaptations in canines with amputations, some of the most common ones include: standing with the limbs more tucked under the body, lumbar kyphosis, dropped scapular sling, decreased angulation of the remaining pelvic limb, increased angulation of the thoracic limb/s. These postural changes occur as a result of the adaptations the amputee takes on to maintain function, but they also place many areas of the body in compromised positions that are not well suited to long term function.

The Thoracic Sling: The above-described increase in body weight on the thoracic limb, together with changes in cervicothoracic range of motion during movement, compromise the thoracic sling. In the forelimb amputee, there is an increased range of motion of this region of the spine in all directions, and we can clearly see a significant head bob in their movement (Fuchs et al 2015; Hogey et al 2013). In a pelvic limb amputee, there is a smaller increase in the cervicothoracic ROM than in the thoracic limb amputee, but the increase is still significant in flexion and extension during motion (Jarvis et al 2013).

The Lumbosacral junction: extension and flexion, and overall range of motion of the lumbosacral spine increases in both pelvic and thoracic limb amputations, and the patient will often stand with the lumbar spine in kyphosis. (Fuchs et al 2015; Hogey et al 2013; Jarvis et al 2013)

The angulation of the limbs: A weak thoracic sling will result in the dog appearing dropped through the shoulder, with increased angles of the thoracic limb as the patient ‘sinks’ to the ground. In the pelvic limb, the increased flexion of the lumbar spine, cranially tilted pelvis, and hind limb/s placed more cranially results in straighter angulation which puts the stifle and hock at risk of injury.

Many of these key areas of concern are related to the postural stability and core strength of the dog. If we can improve their postural strength and endurance, we can go a long way towards improving their longevity, functionality and reducing the incidence of secondary injuries or breakdown.

Taking the entire picture and the individual patient into account – their signalment, history, the presence of comorbidities, and their physical presentation, we can take these three elements and weave them together into a rehabilitation plan and strategy as we slowly release compensation, increase force closure, and improve postural control in these patients.

When it comes to therapeutic exercises, it is essential to start at the very beginning, retraining muscle recruitment patterns through isometric muscle activation to improve postural awareness, control and endurance, before we progress into dynamic exercise and movement.

If you would like to learn more about evaluating and treating these patients, I highly recommend Marinette Teeling’s webinar in the Small Animal Members portal, all about Rehabilitation for the Canine Amputee.