What Research Reveals About Equine Shivers 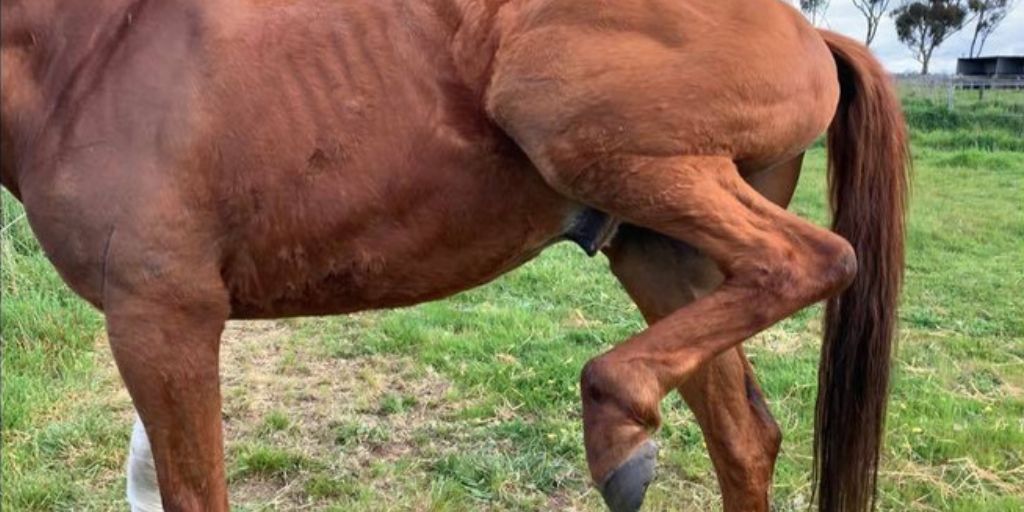 Shivers was once considered as ‘common as dirt’, while today it is considered to be rare. However, the more we understand the components of this degenerative condition and it’s presentation from a neurological and muscle recruitment perspective, the more interested I am as a Vetrehabber about how we can affect those systems and potentially contribute to the management of affected horses.

Equine shivers is a degenerative and progressive neuromuscular disease that is most commonly seen during backing up. Research has shown that there are two common presentations of the condition, that affected horses show degeneration of the deep cerebellar nuclei, and that the muscle recruitment pattern of the hindlimbs is significantly altered.

Let’s explore this condition, both what is already known and what has recently come to light through the work of Dr Valberg and her team, as well as others.

Shivers is a condition affecting large breed horses, including warmbloods, thoroughbreds and draft horses. In the years when horses were used as the primary form of transportation and work, Shivers was common – ‘as common as dirt’, as a 1962 neuropathy textbook states. Geldings over 16.3hh are overrepresented in the population of horses with this condition. It typically develops in horses aged between 2 and 10 years, and most often in horses aged 5 to 7 years.

I rather enjoyed this article from Michigan State University on this condition.

Shivers will initially present as hypertonic muscle contractions and protracted abduction and hyperflexion of the hind limbs when horses are asked to walk backward or lift a hind limb for a handler. In the early stages, the forward gait remains normal. Horses have no evidence of proprioceptive or vestibular deficits and can often move and compete normally for many years. In most cases, Shivers will progress slowly, eventually affecting the initiation of forward walking and turning, with intermittent hyperflexion and abduction of the hindlimb and the characteristic trembling or shivering.

On evaluation of video footage sent in from almost 100 owners with Shivers-affected horses, Dr Valberg identified two variations of the condition:

In 2015, Valberg et al. published a paper investigating and identifying the aetiology of Shivers. They were able to establish that Shivers is an end-terminal neuroaxonal degeneration of the deep cerebellar nuclei, resulting in context-specific hypermetria and myoclonus.

They undertook an extensive histopathologic, immunohistochemical and electron microscopic study of the entire central nervous system, the hind limb peripheral nerves and the hind limb musculature of five Shivers-affected horses. Within the cerebellar nuclei of the Shivers horses, there was axonal degeneration of the Purkinje cells. Additionally, the end terminals of the Purkinje cells within the nucleus lateralis appeared to be reduced in the Shivers horses.

Shivers horses have an increased type 2A to 2B muscle fibre ratio, a finding also seen in horses undergoing training. This can be as a result of constant muscle fibre recruitment induced by myoclonus.

In 2017 the research continued, with Dr Valberg and colleagues investigating the muscle recruitment patterns in Shivers horses through surface EMG. For the first time, the researchers were able to determine that Shivers horses had a severely affected muscle recruitment pattern in the hindlimbs. This pattern was characterised by sustained, elevated levels of activation, a loss of temporal modulation and loss of the precise firing patterns that are normal in a coordinated and controlled gait.

Unlike the control horses, Shivers horses showed large variations in temporal activity, making it difficult to identify precise firing patterns in individual muscles. These abnormal muscle recruitment patterns occurred throughout the stride cycle during backward walking. Temporal modulation was either completely absent, or masked by uncontrolled co-contraction of flexor and extensor muscles, resulting in disordered bursts of muscle activation or continuous tonic muscle activity throughout the stride. This finding correlates well with the fixed hyper flexed or hyper extended hindlimb posture we see during backward walking of these horses.

In addition to the findings regarding backward movement, abnormalities in the muscle firing patterns were also found in forward walking. This indicates that although clinical signs might not appear to be present, there are indeed abnormalities in motor unit recruitment patterns in the forward gaits.

Where does that leave us?

We now have some really great, super-valuable information, even though the research is still in its infancy and has involved only a small number of horses. There is obviously a great deal more to learn about the condition before we can move on to treating or slowing the progression of Shivers in our equine patients, but naturally the treatment of this condition interests me as a Vetrehabber.

I’d love to hear from you. How much experience do you have in treating horses with Shivers? What are your goals and how do you effectively and safely achieve them with these rather interesting horses?

I am very grateful to Dr Stephanie Valberg and others for their research. Since she has made it all open access, here are the links. They’re well worth a read!