The Myofascial Connections of the Equine 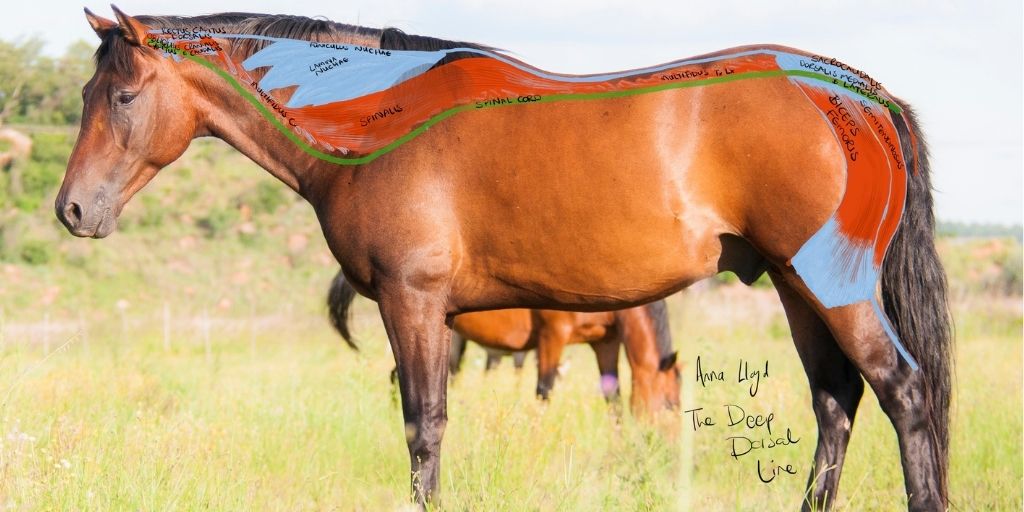 Understanding the superficial and deep myofascial connections within the equine body can help us to more effectively rehabilitate the whole body, including the digestive system and organs, the nervous system and the musculoskeletal systems.

Let’s discuss a few of the intricate connections between the somatic and visceral systems of the equine body.

The fascial lines and slings

The fascia can be divided into seven superficial and four deep lines, as found by Elbrond and Schultz during systematic dissections of the equine body. The superficial lines include the

The deep myofascial kinetic lines include the

For a description of where these lines run and which anatomical structures are included in each, please watch the research refresh videos in the Onlinepethealth Equine members portals, or read the open-access research publications.

The Fascia and the Nervous System

We are increasingly aware of the intricate connection between the fascia and the nervous system, understanding that every nerve ending is housed in fascia, that nerves have to travel through fascial layers and sheets, and, most importantly, that the fascia itself is richly innervated and in constant communication with the nervous system.

Consider the DDL (deep dorsal line) as it runs along the spinal column from the tail to the suboccipital muscles – the rectus capitis major and minor, and the obliquus capitus caudalis and cranialis. These muscles connect to the atlantooccipital and atlantoaxial membranes, connecting to the dura mater, forming myodural bridges. Connections similar to this can be found along the length of the spine at the dorsal intervertebral foramenae.

This close relationship of the DDL with the spinal column and the dura mater highlights one of the mechanisms of action of craniosacral therapy, osteopathy or chiropractic interventions.

The DVL likewise runs along the ventral bodies of the spine, as well as encapsulating the thoracic and abdominal cavities. From a neurological perspective, we find the vagus nerve running through and along this fascial line. The health and correct functioning of the ventral fascial line is paramount to the optimal functioning of the vagus nerve, which controls parasympathetic functions such as digestion, heart rate and the horse’s immune response.

The Poll to Pelvis Connection

The poll and pelvis are connected along a dorsal chain, a ventral chain, a lateral chain and a spiral chain. Understanding this really highlights why we have been able to observe such a close connection clinically for many years!

On the ventral aspect of the thoracolumbar junction, the iliopsoas complex attaches to the spine in a cranial direction, while the diaphragm connects in the same area, in a caudal direction. These two structures form part of the DVL and create a direct connection between the locomotory muscles of the hindlimb and the diaphragm responsible for inspiration, also accessing both the thoracic and abdominal cavities.

This connection highlights the role of the locomotory muscles in the inspiration and expiration of the horse – a relationship we are already familiar with – but also forces us to think about that relationship in reverse – when respiration affects the locomotion of the hindlimbs. When there is a dysfunction or source of pain in the ribs or diaphragm, hindlimb locomotion may be adversely affected as well.

On the dorsal aspect of the thoracolumbar region, the functional line crosses over from one side to the other, connecting the humerus of the forelimb, through the latissimus dorsi and the thoracolumbar fascia, to the opposite hindlimb, specifically through the fascia latae and vastis lateralis to the patella ligaments of the stifle joint.

This functional connection between a diagonal pair of limbs over the thoracolumbar region again highlights the importance of this area of the spine and its role in the healthy and optimal function or action of the fore- and hindlimbs of the horse.

The lower cervical area, or the cervicothoracic junction, is an area we are considering more and more frequently in our patients as malformations in this area of the cervical spine become more commonly recognised. In this region, the cervical spine takes on a curve in extension, which compresses the intervertebral joints and makes adequate stabilisation of this area essential.

The connection between the visceral and the somatic systems of the body is again highlighted in this area, where a direct connection can be made with the tongue, pharynx, larynx, hyoid and guttural pouch of the horse, through the muscles of the cervical spine and into the thoracic cavity.

Understanding these myofascial connections and lines can give us a deeper understanding of the function of the equine body, as well as how we might be able to influence both superficial and deeper structures during rehabilitation for a more profound and long-lasting change.

ABC of the horse atlas